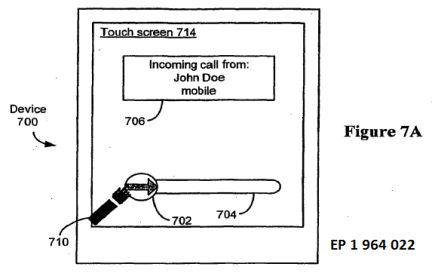 a) For the examination of inventive step instructions relating to the presentation of a particular content and thus aiming to influence human imagination or comprehension are not taken into account as such. Instructions relating to information to be reproduced according to the teaching of the invention can support patentability in relation to inventive step only in so far as they determine or at least influence the solution of a technical problem with technical means.

b) Claim elements relating to information have to be examined as to whether the information to be presented at the same time forms an embodiment of technical means – not already recited elsewhere the claim – for solving a problem. In such case the technical means for solving a problem have to be taken into account for the examination of patentability.

Apple´s well-known and  internationally litigated “Slide-to-unlock” patent – being part of the original iphone patents – has been invalidated in first instance nullity proceedings by the Federal Patentn Court. The patentee appealed to the Federal Court of Justice, which on 25 August 2015 rejected the appeal and finally confirmed the invalidation decision of the Federal Patent Court. The grounds for the decision have been published on the FCJ website only now.

In the proceedings a written description “N1 Quick Start Guide, Version 0.5” relating to a prior art mobile phone “Neonode N1” formed the closest prior art reference E14. It describes a mobile phone having a touch-sensitive display displaying upon actuating a power button the information “Right sweep tp unlock”. Thereupon the user can unlock the device using a corresponding finger movement (gesture). An unlock image, however, is not displayed. Upon failure to unlock the phone an invitation to retry is instead displayed. The distinguishing features over closest prior art reference E14 therefore were found to be:

(5.2) along a predefined displayed path on the touch sensitive display

(5.4) wherein the unlock image is a graphical, interactive user-interface object

(5.5) with which a user interacts in order to unlock the device.

In its first instance decision the Federal Patent Court found that all claim elements (5.1) to (5.5) would relate only to the presentation of information directed to the user and would not influence the technical functioning of the device and consequently had to be ignored for the assessment of inventive step.

The court, however, held that features (5.4) and (5.5) do not add any technical matter to features (5.1) to (5.3) which would contribute further to the solution of the technical problem of improving operation relaibility of the unlock procedure and were therefore ignored by the court for the examination of inventive step. Features (5.1) to (5.3) were meanwhile regarded by the court as obvious in view of further reference E7, a video presented at a conference in 1992 showing several virtual operation keys on a touch sensitive display, among them a virtual slider toggle providing the function of the unlocking mechanism according to the patent in suit (“The user can then grab the pointer and slide it to the other side”), albeit not in connection with a mobile phone. The court, however, took the view that the skilled person would nevertheless apply the refined virtual key functionality disclosed in E7 to the gesture-controlled unlock procedure of the mobile phone with touch sensitive display according to E14, thus rendering the claim obvious of a combination of references E 14 and E7. This judgement equally applied to the amended claims of the several auxiliary requests on file.

While the judgement resulted in the loss of the patent of Apple, it is in general good news for inventors striving to improve user interfaces. Patent applications in this field are frequently rejected as being related to the presentation of information which allegedly had to be ignored when assessing inventive step. The FCJ clearly disapproves such practice stating (at the end of paragraph 18 of the judgement): “It would not be justified not to include the technical effects of the presentation of information for the examination of inventive step, because they are claimed in the patent claim merely in the form of presentation of a particular information.”